In 1885, Benjamin C. Faurot developed the first successful electric streetcar system in Ohio,
when he purchased Lima’s horse-drawn railway and had it converted to electric power in 1887. This electric railway line was one of the first in the United States. 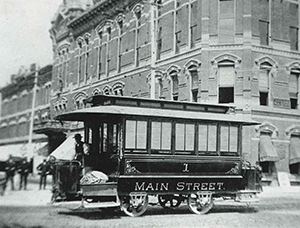 The electric streetcars, or the inter-urban lines as they were referred to, were popular and the dominant mode of public transportation within Allen County for more than half a century.

The Western Ohio Railway company, which linked Lima to Piqua and later to Dayton, became the first of the electric interurban lines that would make Lima an inter-urban center. At the peak of its development, it was possible to travel almost entirely by interurban cars from New York City to Chicago by way of Lima, Ohio.

The electric railway line went through several different owners and names. Through 1896, the line was called the Lima Electric Railway; from 1896 to 1900, its name was the Lima Railway; from 1900 to 1909, it was called the Lima Electric Railway and Light Company. Then in 1909 to 1922, the line was called the Ohio Electric Railway and from 1922 to 1940, the lines name was the Lima City Street Railway Company and was part of the Cincinnati and Lake Erie Railroad Company. In 1938, the demands for flexibility as well as increased maintenance costs, the electric streetcars were slowly being replaced in favor of gasoline-powered vehicles, and later diesel-powered motor buses. By 1940, the electric streetcars had been totally abandoned.

The newly introduced public transit service operated by the Lima City Lines (as part of the Cincinnati and Lake Erie Railway Company); found itself in financial difficulty by 1950. (Sometime during 1946, the Lima City Lines was no longer a part of the Cincinnati and Lake Erie Railway Company). The public transit service was abandoned due to the popularity of the automobile, decreasing ridership, and the company’s inability to realize a profit. In 1951, the service was reorganized as the Lima Transit Company and the Lima Suburban Lines, Inc. Ridership continued to decline through the 1950s and 1960s despite several attempts at fare and service adjustments until in 1966 the service again required reorganization.

Established in 1966, the Lima Bus Company continued public transit operations until 1972 when, due to poor management, erratic service, and increased fares, transit service was transferred to the Lima Bus Service, a private company franchised by the City of Lima. As transit service was in severe jeopardy within Lima, the new operator sought and received subsidies from the City. By 1974, Marion Gerhart, a new operator, was managing the transit service and the subsidies had risen to 60.0 percent. In March of 1976, a disillusioned City sought a more efficient and economical means of continuing bus service and began entertaining the notion of allowing other transit agencies to manage and/or operate the City’s mass transit operations.

1976 to the Present: The Allen County Regional Transit Authority

In September of 1974, the Allen County Board of Commissioners created, under provisions of the Ohio Revised Code, the Allen County Regional Transit Authority (ACRTA). The ACRTA was created in an attempt to centralize mass transportation planning within the County and to secure federal funding for project implementation. The ACRTA was to have the ability to acquire, construct, operate, maintain, or replace existing transportation facilities as well as have the power to propose building and operating levies for voter approval.

In October of 1975, the Lima City Council passed a resolution authorizing the ACRTA to act as the City’s agent for the preparation and application of a federally funded operating assistance grant under the auspices of the Ohio Department of Transportation (ODOT) and the Urban Mass Transportation Act. This action proved to secure the ACRTA’s relationship with the City of Lima as a transit management partner.

The Lima City Council received four proposals from private, for-profit transit operators, but after review of the proposals selected the ACRTA’s proposal. In May, the Allen County Board of Commissioners agreed to cooperate with the ACRTA and the City of Lima in providing public transportation into the County. In July, an eighteen-month agreement was signed between the City of Lima and the ACRTA which provided that the City would maintain, market, and pay all expenses for the system, except those that occurred if bus routes were extended outside the City limits. The ACRTA began extending service into the County in 1977 when buses began servicing the Village of Elida and three industrial plants outside of the City. In August 1977, the Lima City Council signed another resolution authorizing the ACRTA to provide transit service through 1979. In March of 1980, the Lima City Council transferred all federal and state grants as well as existing equipment, bought with previous grant monies, to the ACRTA, thus conferring upon ACRTA ownership of the transit system. The current fixed route system is a flag stop system, whereby customers simply flag the bus down anywhere along the route as well as get off at any location along the route.